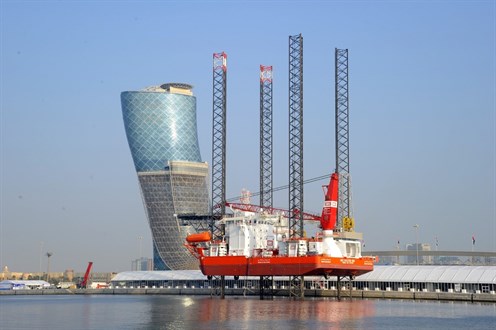 Gulf Marine Services (GMS), the Abu Dhabi based owner and operator of self-propelled and self-elevating vessels (SESVs), will be showcasing the latest addition to its fleet at this year’s edition of ADIPEC. The GMS Evolution, an E-Class vessel built at GMS’ shipyard in Mussafah, moored outside ADNEC over the weekend and jacked up today, ahead of the opening of ADIPEC tomorrow. No vessel of this size has ever previously been physically present at ADIPEC.

GMS Evolution has been fitted with a revolutionary new cantilever system, which gives clients a much greater range of options in the way they use the company’s barges to service their offshore assets. This new system, developed in partnership with Norwegian systems engineer Dwellop, offers new cost-effective solutions for work that has traditionally been performed by more expensive non-propelled drilling rigs.

GMS’ Chief Executive Duncan Anderson explains: “The assets we tend to service are located mainly in shallow water and were installed quite some time ago, so that a lot of the infrastructure is well advanced in its useful life. This creates asset integrity issues, which traditional servicing methods will struggle to resolve, because only smaller weights can be transferred and handled, a function for which the new cantilever system is ideally suited.

“Using the cantilever system, clients will be able to deploy sooner, will have no requirement for tugs and the time spent rigging up, rigging down and lifting backwards and forwards will be removed. Basically, large amounts of non-productive time can be saved, both for ourselves and for our sub-contractors.”

The GMS Evolution’s presence at ADIPEC was meticulously planned, in full collaboration with all of the relevant Abu Dhabi authorities. Going on site at any location requires compliance with the company’s stringent barge move procedures, which include studying the bathymetrics and geotechnics of where the vessel’s legs are jacked down, because the process involves many thousands of tons being placed on the seabed.

For the sea channel next to ADNEC, no such data existed, so GMS commissioned a sonar scan of the area and drilled boreholes to determine the soil integrity. An analysis of the soil showed it was capable of sustaining the pressure and allowed GMS’ technical team to calculate how far the spudcans on the bottom of each leg would penetrate the seabed. For further information, and to arrange a visit to the GMS Evolution, please contact Archie Berens on +971 (0)55 559 7407, or email aberens@bellpottinger.com

Gulf Marine Services (GMS) designs, builds and operates Self Elevated Support Vessels (SESVs), also known as jack-up barges. These SESVs are four-legged self-propelled vessels with a large deck space, crane capacity and accommodation facilities. They can be used for a wide variety of purposes, supporting the installation, maintenance and refurbishment of offshore oil and gas platforms and wind turbines, together with well intervention work.

One of the vessels’ most important features is that they are able to move independently, with no requirement for anchor handling or tug support. This reduces both the time taken to be ready for deployment at the required location, and the costs of getting there.

GMS is headquartered in Abu Dhabi, and also has operations in Aberdeen, from which it services customers with offshore installations in the North Sea. GMS was founded in 1977, and in 2013 it listed on the main board of the London Stock Exchange. The company reported revenues for 2015 of US$220 million, with net profit of US$75m.